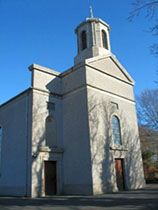 The Church of Our Lady, Killamoate is actually the second church to be built on the site. It dates from 1850 and it replaced an earlier church that had proven too small for the congregation.

Fr. Morrin, the parish priest of the time, asked the congregation to stay behind after Mass one Sunday, and got them to stand together so that he could estimate the size of church needed. He left room for a gallery to be added, but said it would never be needed, and so it proved.

The church contains two beautiful stained glass windows by Harry Clarke, which were fitted in the 1920s.

The land for the earlier church had been donated by the local landlord, Mr. Westby, of High Park, Kiltegan (now the headquarters of St. Patrick’s Missionary Society). When Mr. Westby came under criticism from some of his co-religionists he repented of his generosity and attempted to forbid the building of a church on the site. Some local people sought counsel of Daniel O’Connell, who advised them to bury their dead in the ground in question. Accordingly the next three people who died in the area were buried there, after which the use of the site for religious purposes could not be prevented.